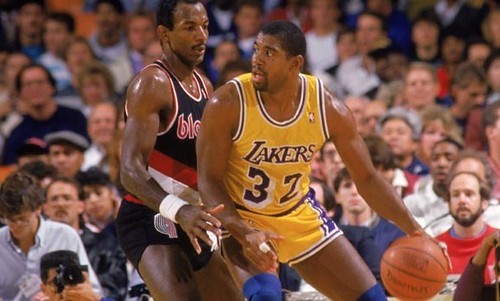 “Magic Johnson” by Kip-koech is licensed under CC BY 2.0

Does tall point guard have an advantage in the NBA?

The point guard’s role is to control the tempo of the team’s offense by getting the ball to the player, guard opponents’ point guards. They are the leader on the floor who works closely with the coach’s plan. Some point guards strength is in assisting teammates in finding the best shot, while others are great at scoring by themselves. But the core responsibility of a point guard role is to lead the team in offense, and they’re usually the shortest guy on the court.

The average height of the NBA point guard range from 6’1″ to 6’4″. Point guard may be the shortest player on the team, but oftentimes, they’re the best dribble on the court, good at finding strength and weaknesses in their teammates and opponents, great distributors, and great scorers. Stephen Curry (6’3″) and Kyrie Irving (6’2″) are such legendary point guards that dominate the court as a point guard position.

However, there are some exceptional tall NBA players who take up the role of point guard. No one would have expected such a tall point guard in the NBA, but their skill to prove that a tall player can exceed in a point guards position.
When you search who is the tallest point guard in NBA history, the result will most likely be Magic Johnson. In this article, we will go over the Top 10 Tallest NBA Point Guards in History. And some of these point guards became the NBA Hall of Famer.

Who Is The Tallest Point Guard Now?

Ben Simmons is the most potential tall point guard who plays for the Philadelphia 76ers. He is listed at 6’11”, and was listed in a point guard and power forward position.

Simmons originated from Australia and was selected by the 76ers in the 2016 NBA draft. He missed his debut in the 2016-17 season after he suffered a fracture of the right foot. Simmons starts his rookie season in 2017-18. He helped the 76ers move on to the second round of the playoff after defeating Miami Heat.

Simmons helped the 76ers with a 4-1 win against the Heat, and he became the first rookie after Magic Johnson in 1980 to have a triple-double in a playoff (17 points, 13 rebounds, and 10 assists win in Game 4).

With his tall physique and large wingspan, he is great at the defensive and offensive end of the game. He was named rookie of the year and earned NBA All-Rookie First Team.

Maybe is still too early to put Ben Simmons on our list of the greatest point guards, But he has a lot of potentials to be on our list for the Top 10 Tallest NBA Point Guards in History. We just need time for him to demonstrate his skill as the tallest point guard in the current NBA era.

Paul Westphal‘s professional basketball player year from 1972-1984. At 6’4″, he became a great point guard who became the team’s leader in ball handling, sharpshooter off the ball, and great at defense.

Westphal joined the Boston Celtics in the 10th overall pick in the 1972 draft. He played three seasons for the Celtics, which included a championship in 1974. He was not the main player in the Celtics during the championship season. Westphal 19.3 minutes, 9.8 points, and 2.9 assists during the 1973-74 regular season.

He traded to Phoenix Suns in 1975 and became a major player for the Suns. He increased his playing time to average 36.1 minutes, 20.5 points, and 5.4 assists. Westphal led the Suns to their first NBA Finals against Celtics in 1976. During Game 5 of the series, Westphal helped the Suns stay on the series by leading the game to triple overtime. The Celtics eventually beat Suns in game 5 and won the series in game 6.

Throughout his career, Westphal averaged 15.6 points, 4.4 assists, 1.3 steals, and 50.4% field goal per game. He is well known for his effort in helping the Suns to their first NBA finals. He played for Seattle SuperSonic and New York Knicks in his late career, but he didn’t make a huge impact as he represented the Suns.

Derek Harper was listed 6’4″ during the draft, and he can be considered tall for the point guard position. He was drafted by the Mavericks in 1983. He spends 10 years with the Mavericks, and 6 out of the 10 years Harper helped the team reach the NBA playoff. Harper was a strong offensive and defensive point guard, he averaged 15 points and 6.1 assists per game.

Along with All-Star Shooting guard Rolando Blackman, Mavericks made it to Western Conference Final in the 1987-88 season, but Harper and Blackman failed to repeat their success to bring the team back to the Western Conference.

Mavericks’ performance dropped tremendously during Harper’s last 3 seasons with Mavs. He still performed well in the team, but it’s not enough, Harper decided to leave for the Knicks in 1994 where he reunited with Blackman. He retired after 16 seasons.

Ron Harper‘s height at 6’6″ put him on our list for Tallest Point Guards in NBA History. But he initially started his career with the Cavaliers and Clippers as a shooting guard for 11 seasons. He is a great scorer during his rookie year with an average 22.9 ppg, 4.8 rpg, 4.8 apg, and 2.5 spg. He was placed second on the rookie of the year in 1987.

Harper spends most of his career as a shooting guard but was forced to adjust his playing style as a point guard when he joined the Bulls. He was listed as shooting guard during his first season with the Bulls and averaged 6.9 ppg, 2.0 apg, and 1.3 spg.

Harper’s score took a tremendous dropped from an average of 20 points per game as a shooting guard to single digits per game as a point guard in Bulls. He switched to a defensive point guard the following season to assist Michael Jordan and Scottie Pippen on their second three-peat runs.

Harper brought his new discovered talent as a point guard to La Lakers in 1999 with the same role in Bulls. He bought along defensive end as a backup point guard. He retired after he won two more championships alongside Kobe Bryant and Shaquille O’Neal.

Dennis Johnson was a late bloomer who begin to shine in his NBA career after the switch position from shooting guard to point guard. He falls under our 10 Tallest NBA point guard in history due to his above-average height for a point guard.

Johnson also nickname DJ spend half of his career with the Celtics as a defensive point guard with the main task of shutting down the opponent’s best backcourt player. Johnson was a great scorer when he played for Sonic. He helped Sonic won their first NBA championship in 1979. During Game 4, Johnson with 32 points along with Gus Williams 36 points defeated the Washington Bullets with a 3-1 series. He was named NBA Finals MVP in 1979.

Hardaway had a lot of potential as a point guard, but the team thinks he has more potential in shooting guard. He switched to the shooting guard position during the 1997-98 season. But sadly, he had a series of knee injuries in 1996.

If we talked about the top tallest point guard in NBA history, we have to include Gary Payton. Payton was one of the best point guards of all time with a nickname of “The Glove”. The nickname becomes famous after his defensive skill was demonstrated in 1993 against Phoenix in the Western Conference Final. Not only does he stopped his opponent physically, but he is also great at getting into his opponent’s head with his trash talk.

Payton averaged 16.3 points, 3.9 rebounds, 6.7 assists, and 1.8 steals per game. Not only does Payton contribute points to the team, but he is also great at the defensive end of the court. He is the only point guard in history to received NBA defensive player of the year in 1996, along with NBA steal leader in the same year.

Payton played for Sonic, Bucks, Lakers, Celtics, and finally Heat where he won his first NBA championship in 2006. At aged 37, Payton reunited with former teammate Shaquille O’Neal in Heat. Although his minutes were limited to an average of 28.5 minutes, 7.7 points, and 3.2 assists per game in the regular season, Payton bought rich experience on the defensive and offensive end as a backup point guard to Jason Williams.

In the 2006 NBA Finals, Payton helped the Heat stay on the series by hitting the winning jump shot in Game 3.

Walt Frazier is a Hall of Famer in 1987. He is one of the top Knicks players in history who helps the team won two NBA titles. Walt pick up his nickname “Clyde” after he wore a fedora during his rookie year.

Frazier single-handedly led the Knicks to NBA Champion in 1970 Game 7 against La Lakers. Willis Reed suffers a leg injury in Game 5, and he manages to return in Game 7 for two minutes before limping off the court. Frazier carried the team to victory with one of the most outstanding performances in NBA history with 36 points, 19 assists, and 6 steals.

Frazier is definitely one of our top tallest point guards in NBA history with his outstanding point guards skill in scoring and defending. On December 15, 1979, Knicks retired his No. 10 Jersey.

At this moment, Jason Kidd is the head coach of the Dallas Mavericks.  He won his first NBA champion presenting Mavericks in 2011 along with Dirt Nowitzki.  At 6’4″, Kidd is by far one of the top point guards in NBA history with the quality as a leader, playmaker, clutch shooter, defensive stopper, and great rebounder for a point guard.  He is 2nd in NBA All-Time Assist leader with 12091 assists in 19 years.

It was fun watching Kidd’s action on the court because of his incredible passing ability.  He is a great scorer and a clutch scorer where his teammate can rely on.  Not only is he a great scorer and passer, but he is also a great rebounder for his size.  He has a total of 107 triple-double in his career.

During the 1961-62 regular season, Roberston had career-high 22 rebounds and 22 assists in two separate games.  He had career-high 56 points won against La Lakers on December 18, 1964.

Not a lot of point guards can average triple-double in each season, it won’t be surprised Roberston racked up points, assists, and rebounds to assist his team’s victory.  Roberston’s great performance along with Kareem Abdul-Jabbar led the Bucks to become NBA Champion in 1971.

Bucks retired in 1974, his No. 1 jersey was retired by the Bucks on October 18, 1974.  He became one of the greatest triple-threat players in the NBA who can score inside the paint, outside the arcs, and dish out a pass to assist his teammates.

Who is Magic Johnson?  He is considered one of the best point guards in NBA history because of his impact on the basketball world during the last 70s to early 90s.  With his height of 6’9″, Johnson can easily take up the small forward position. But he did not let his height stop him from becoming the best tallest NBA point guard in history.

Johnson was skillful at both ends of the court, his career averaged 19,5 points, 11.2 assists, 7.2 rebounds, and 1.9 steals.  He is 3rd on the NBA player with the most triple-double (138 triple-double) behind Russell Westbrook and Oscar Robertson.  One of his signatures moves no-look pass has become an art of passing which was a study by later generations.

Johnson’s skillful passing, ability to score, great leader, and high basketball IQ led LA Lakers to 5 NBA Champion titles.  He was recognized as one of the greatest players in NBA history.

Do you think tall point guards have an advantage in basketball?