NBA games have taken revolutionary changes for the past two decades from a mid-range game to 3 points line game, and many times, NBA players will shoot beyond three points line.

When does this start?

Three points shot is not new to the game, it is always around, but it was not as focused as we have seen in today’s NBA game.

Let us compare the three points field goals per game and attempts over two decades.

From the numbers above, we can see a slight increase in three points game from 2000-2009. But the NBA game starting to change after 2009.

We can see the NBA game starting to change in 2009 and then we can see significant changes in 3 points era in the year 2012-2013 NBA season.

This is when the Splash Brothers era started.  Two of the best shooter joined together to form the best shooting duo in NBA history and won three NBA Championships with Warriors.

Since the Splash Brothers era, we can see more NBA players attempts to challenge the splash brothers duo in their three-pointer games, and this is the start of the NBA revolution from mid-range to behind the arc.

What do these numbers represent?

NBA players are shooting an average of 2.5 times more in three pointer than two decades ago.

“File:Dirk Nowitzki high fives 2013.jpg” by scott mecum is licensed under CC BY 2.0

Nowitzki is one of a few big men in the early 200os who shoot the accurately mid-range jumper and behind the three points line.  His signature move is one-legged Fadeaway shot, and it is one the toughest shot to block when a seven-footer does one-legged fadeaway.

Nowitzki was born in West Germany. He came to the NBA league in 1998 NBA draft with 9th overall pick by Milwaukee Bucks. He was traded to Mavericks on draft night. Nowitzki represented Mavericks for 21 seasons and became franchise players.

Nowitzki’s first season average 20.6% in three pointer per game in the regular season. His next season, he increases his three-pointer for the season to 37.9%. For his 21 seasons in NBA, he maintains 18 seasons with over 35% in three-pointers per game.

In the current NBA, you will see more big men who can shoot three-pointer accurately.  For example, Pau Gasol, Nikola Jokic, Demarcus Cousins, and Kristaps Porzingis.

Pierce was an NBA player for 19 seasons. He was born in Oakland, California, played for the University of Kansas for three years.

Pierce started his NBA career with Boston Celtics as a 10th overall pick in the 1998 NBA draft.

On November 9, 2001, Pierce scored a season-high three points percentage (66.7%) with eight out of twelve three pointers. He also scored 35 points for the night.

On July 17, 2017, Paul Pierce resigned with Celtics in order to retire with the team.

Carter has played 22 NBA season, and he is currently playing for Atlanta Hawks

Vince Carter’s career highlight is known for his incredible dunk over his opponents.  Even though his dunks are awesome, his shooting behind the three points line is very solid.  He is sixth place three-pointers in NBA history. On December 11, 2006, Carter scored career-high nine three pointers made in the game.

Carter declared the 1998 NBA draft, was selected by Warriors in the 5th overall pick but was traded Toronto Raptors.

Carter won Rookie of the Year award with an average of 18.3 points per game.  He was known for his explosive offensive and ability to dunk over his opponents.

Carter’s ability to score on the court made Raptors resigned six years contract which worth as much as $94 million. He averages 27.6 points per game in 2000-01.

But what follows Carter was a series of knee and hamstring injury which he suffers during 2001-02. He missed the final 22 games on the regular 2001-02 season due to injury.  Raptors were defeated by Detroit Pistons in the 2002 NBA Playoff game with the absence of Carter.

Carter’s career in Raptors was not as successful after his offseason surgery in 2002. The following 2002-2003 season, Raptors failed to make it to the 2003 NBA Playoff.

Klay Thompson was known as the Splash brothers with Stephen Curry. He is also referred to the Luigi (best sidekick of Mario) to Curry.  Their teamwork and ability to score two pointers or three pointers earned them the best duo in NBA history.

Thompson was born in Los Angeles, His mother was a volleyball player in college. His father was a first-round overall pick in the 1978 NBA draft.

Thompson declared for the 2011 NBA draft after his Junior season at Washington State University. He was 11th overall for Golden State Warriors. He teams up with Stephen Curry to form the best shooting duo in NBA history.

On May 8, 2013, Thompson score career-high 34 points against San Antonio. Thompson and Curry combined with 483 three pointers made with 211 three-pointers.

Klay Thompson is one of the top three-pointers in the current NBA. The reason he is in 10th on this list because he has the potential to be the top 10 NBA three point leaders all time.  As long as he recovered from his ACL injury, he will continue to dominate behind the three points line.

James Harden has been in the NBA League for 11 seasons

Harden went to Artesia High School in Lakewood, California. He went to the Arizona States for a college basketball career. He declared for the 2009 NBA draft pick with a third overall pick by Oklahoma City Thunder.

Harden’s career in Thunder was a support role for Kevin Durant and Russell Westbrook. Even though Harden come off the bench as 6th man, he brought to the team was tremendous. His 3 point percentage for 2009 was 37.5% on his first season. He was named NBA Rookie of the Year’s second team.

Harden was traded to Houston Rockets during his 2012 free-agent period.

When Harden plays for Rockets, he proves to the league that he belongs to the team stars instead of a support role in his previous team.

Harden improves every season with his signature Step back shot which allows him to shoot over his opponent behind the three points line.

Kyle Korver came into the NBA league with his accuracy in long-range shots.

Korver declared the 2003 NBA draft with 51st overall pick by New Jersey Nets. He traded to 76ers during draft day. In 2004-05 season, Korver scored season-high most three pointers made (226) in his career.

Larry Bird is one of the best players in the 80s-90s.  During Bird’s era, players don’t normally shoot three pointers during the game.  Bird showed the league that big man can shoot beyond the three points line.  He is deadly

Bird’s ability to grab rebounds, passes the ball to his teammates, and shooting three pointers have helped him won three championships for Celtics.

Miller has a couple of nicknames during the NBA career. He was known as “Miller Time” and “Knicks Killer” due to Pacers and Knicks use to go head to head in the Eastern Conference Final. He was considered the greatest player of all time and the greatest three pointer in NBA history.

Miller’s scoring ability on the court put a lot of pressure on his opponent’s team. On November 28, 1992, Miller scored season-high 57 points and made 21 out of 23 free throws.

One of the unforgettable moments in Miller’s play was “eight points in nine seconds” in 1995 Game 1 Eastern Conference Semifinals against New York Knicks. Pacers turn the game around with 18.7 seconds remaining when they were losing by six points (105-99).  Miller’s overwhelming performance stunned Knicks fans on Madison Square Garden that night by scoring eight points in nine seconds. Pacers stole Game 1 from Knicks with a final score of 107-105.

Ray Allen is the current leader on the NBA three point leaders with a 24505 three point field goal made.  He is one of the greatest long-range shooters in history.

Ray Allen was born in Merced, California. He went to high school in South Carolina. He went to college in UConn from 1993-1996. During his college years, Allen was known for his long-range shooting.

Allen declared the 1996 NBA draft, 5th overall pick by Timberwolves, and was traded to Bucks during draft day.

Allen continued to develop his long-range shooting in the NBA. He is the leader in all-time three pointer field goals made.  During Allen’s rookie year with Bucks, he averages 13.4 points per game with 23 points on his sixth game. He scored season-high 29 points on April 18, 1997.

Allen joined Boston Celtics from 2007-2012. He joined with Kevin Garnett and Paul Pierce to form “Big Three” in Celtics.

January 16, 2008, he scored season-high 35 points, four out of ten three pointers made, and seven out of eight free throws made. 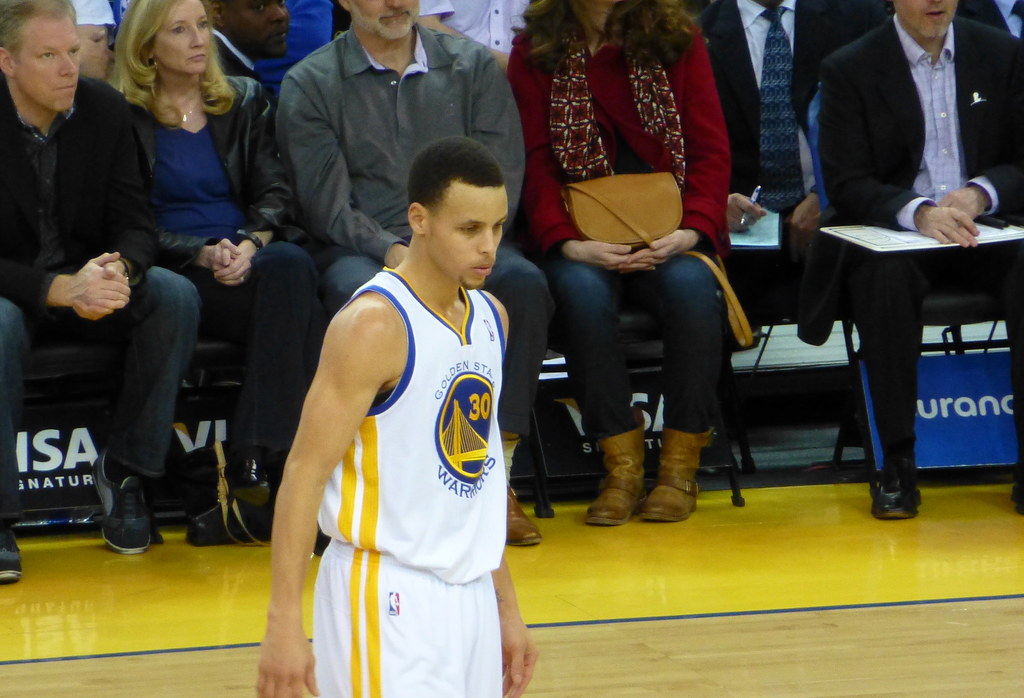 Stephen Curry came into the league with his precision in long-range three pointers and quickness in his one motion shooting form. He is the current third place in all-time three point field goals made in NBA history.

Curry came into the NBA league with his ability to score behind three points line and his quickness around the court. He averages 17.5 points per game in his rookie season. On December 18, 2009, Curry scored 26 points with six out of six three points (100% three point percentage).

Curry has a history of ankle injuries from 2010-12. He had his first right ankle surgery in 2011 to repair “instability that existed in the ankle due to recurrent ankle sprains”. He continues to have multiple occasions of ankle sprains during the 2011-12 season which causes him to miss 40 games. His average points per game for 2011-12 dropped to 14.7 points.

Curry’s NBA career was at risk due to his injuries. He went for his second surgery to clean out “loose debris and scar tissue”.  Warriors resigned Curry with a $44 million contract for four years.  Many people believe Warriors took a very risky approach in resigning Curry.  But who would have known Curry’s recovery bought Warriors to a new height for the team with three championships.

With the addition of Klay Thompson to the Warriors, Curry and Thompson form the best shooting duo (splash brothers) in NBA history. they won their first NBA championships.

On November 7, 2016, had career-high thirteen three points made in a game.

NBA games have shifted from two pointers to slightly more three pointers.  More and more players starting to shoot three and it is not weird to see a big man shoot three in the current NBA.  I still like it when the player takes the ball up to the hoops with a high light finish. But I also enjoy NBA player takes crazy long-range shots way beyond three points line on a regular basis.  I am looking forward to more exciting games in the next NBA season.

You can check out Basketball Reference for their full list of 3 pointers leaders of all time.