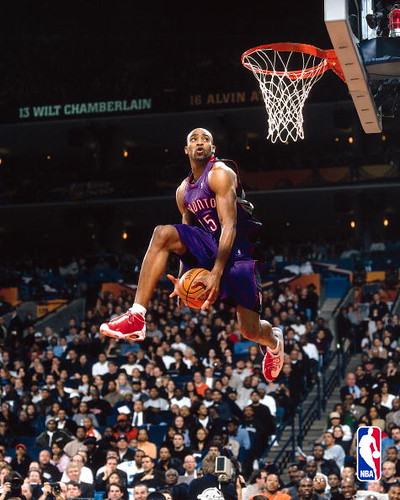 “Vince Carter” by publicidad_matias is licensed under CC BY-NC-ND 2.0

There are a lot of debates on “Who has the highest vertical jump in NBA history?”

Over the course of NBA history, we see players in the NBA with amazing vertical leaps. Some players are well known with their vertical leap confirmed, while others have not been proven.  Just like great jumper Dr. J’s highest vertical jump was not confirmed.

Kobe Bryant was known as Black Mamba, was a great player in NBA history of all time.  It was unfortunately lost for NBA fans and Bryant’s family when the news of Kobe Bryant’s death on January 26, 2020.  Bryant is in the 20th spot of the highest vertical jump in NBA history because of his vertical jump at 38 inches.  His dunks over big guys such as Yao Ming (7’6″) or Dwight Howard (6’11”) made NBA games great.

Even though some referred to him as selfish players or untouchable, but we have to respect his love for the basketball game, work ethic, and always gave us his best performance on the court.  He was 5 times NBA Champion, 2 times NBA Finals MVP, and 18 times NBA All-Star.  Kobe has much great performance on the court, his crazy dunks, fadeaway, and ability to score in the game.  He made 81 points game against Raptor, only rank second in most score in a game in history behind Wilt Chamberlain’s 100-point game in 1962.  Kobe’s last game in NBA scored 60 points.  It a great way to end his NBA career with respect.
Want to dunk like Kobe?

Tracy McGrady is known as T-Mac was one of the great players to watch in the last decade.  He was recorded at 6’8″ with a vertical leap of 4o inches.  One of the T-Mac highlights was his greatest comeback victory by scoring 13 points in 33 seconds (4 three-pointers and 1 four points play) against San Antonio Spurs.

Lebron James is one of the most dominant basketball players in this era.  He is 6’9″ with a vertical jump recorded at 40 inches. His explosive dunk and drive to the basket that makes him a great player to watch.  He is a great leader on the court who can score, pass, and grab rebounds.  We can closely compare his style of play to Magic Johnson who led the LA Lakers to 5 times NBA championships.

Allen Iverson is by far one of the greatest players in the NBA during the last decade and also known as “AI”.  He is 6 feet with an incredible vertical leap at 41 inches.  Iverson also was known for his famous Iverson crossover which he crossover and scored a jumper against Michael Jordan.  His crossover moves are still studied among basketball players.
Advertisement

Iverson was a great basketball player with many highlights and awards during his NBA career except the NBA champion.  He led the Philadephia 76ers against the LA Lakers Kobe-Shaq duo in the 2001 NBA finals.  Iverson scored a playoff-high 48 points in one of the games, but the 76ers lost to the Lakers in a 4-1 series.

Shawn Kemp is 6’10” with 41 inches vertical leap.  He joined Seattle SuperSonics (1989-1997) along with All-Stars player Gary Payton and lead the SuperSonics against Michael Jordan’s Chicago Bulls team in the 1996 NBA finals.

Dominique Wilkins (6’7″) is one of the great dunkers and entertainers during the 80s.  Wilkins and Jordan went head to head on multiple occasions during the NBA slamdunk contest. He is 2 times NBA Slamdunk champion in 1985 and 1990.

Speedy Claxton is another small guy (5’11”) in the NBA who has an amazing vertical leap. His ability allow him to join the San Antonio Spurs’  2003 champion team. He was an incredible backup point guard for Tony Parker and he made big plays during the 4th quarters of Game 6.

Vince Carter is 6’6″ with incredible dunks during his career.  He came into the league with incredible jumping power and dunk over players on the court.  He won the 2000 NBA Slamdunk contest with amazing dunks (360 windmill dunk, between the leg bounce dunk, and elbow in the rim dunk) that stunned the crowds.

Carter suffered a series of knee injuries in 2001-02, but it did not stop him from showcasing his dunk highlights during the rest of his career.

Nate Robinson is one of the few NBA players who are below 5’10” and with an amazing vertical leap.  At 5’10”, Robinson won 3 times NBA Slamdunk slamdunk contest in 2006, 2009, and 2010.  In the 2006 slamdunk contest, he invited Spud Webb to be part of his dunk by jumping over Webb during his dunk.
Advertisement

He left the NBA in 2015 and played overseas basketball for 4 years.

Harold Miner is 6’5″ with 2 times NBA Slamdunk champion in 1993 and 1995.  Miner’s NBA career was short from 1992-1996.  Even though his jumping power was incredible, he failed to live up to the expectation and left the NBA early.

Muggsy Bogue is one of the smallest NBA players at 5’3″ and with a vertical jump at 44 inches.  His NBA career was from 1987-2001.  Bogue won much respect in the NBA because of his size, quickness, and jumping ability.

Andrew Wiggins is a young player who joined the NBA for less than 6 years.  He is a few young players at 6’7″ with a vertical jump at 44 inches.

Wiggins never join the NBA slamdunk contest since he joined the NBA. Some believe he has not recovered from his loss in 2013 McDonald’s All-American slam dunk contest.

But Wiggins continues to demonstrate his amazing dunk in the games. We will expect more highlight Wiggins after he joined the Golden States Warriors in 2020.

Shannon Brown is 6’4″ with an incredible vertical jump at 45.5 inches.  He demonstrated his amazing dunk during the games and many of his dunks were the highlight of the day.

Spud Webb is a 5’7″ NBA player with a vertical jump at 46 inches.  Webb is one of a few below 5’10” NBA players in NBA history. Nobody would believe Webb can join the NBA with his height, but he proved many people wrong by joining the Atlanta Hawks in 1985.

Zach LaVine is a 6’6″ guard with an amazing vertical leap at 46 inches. He came into the NBA league in 2014 and joined the Timberwolves.

Michael Jordan is 6’6″ with an amazing vertical leap at 46″ and he earned his nickname as “Air Jordan” “His Airness”. During the 1988 NBA Slamdunk contest, Jordan demonstrated his revolutionary dunk from the half-court line which stunned the crowd and become the slamdunk champion.  Jordan won back to back NBA slamdunk contest in 1987 and 1988.

Jordan’s greatness is not just his vertical jump, his 6 time NBA champion, 5 times NBA MVP, and 10 times scoring champion is among career highlights.

Darrell Griffith is known as Dr. Dunckenstein with an incredible 48 inches vertical at 6’4″.  He demonstrated his incredible dunks during the 1984 and 1985 Slamdunk contest.   He played for Utah Jazz from 1980-1991.

Wilt Chamberlain has been known for “Wilt the Stilt” “The Big Dipper” during his NBA career from 1959-1973.  Chamberlain is 7’1″ with the vertical jump recorded at 48 inches.   The dipper dunk was his signature dunk back in the days.

Chamberlain was not only known for his vertical, but his NBA career will also amaze you.  He won two NBA championships in 1967 and 1972 and the only NBA player to score 100 points in a single game.  On March 2, 1962, Chamberlain lead the Philadelphia Warriors to defeat New York Knicks (score for the game 169-147) with 100 points and 25 rebounds.