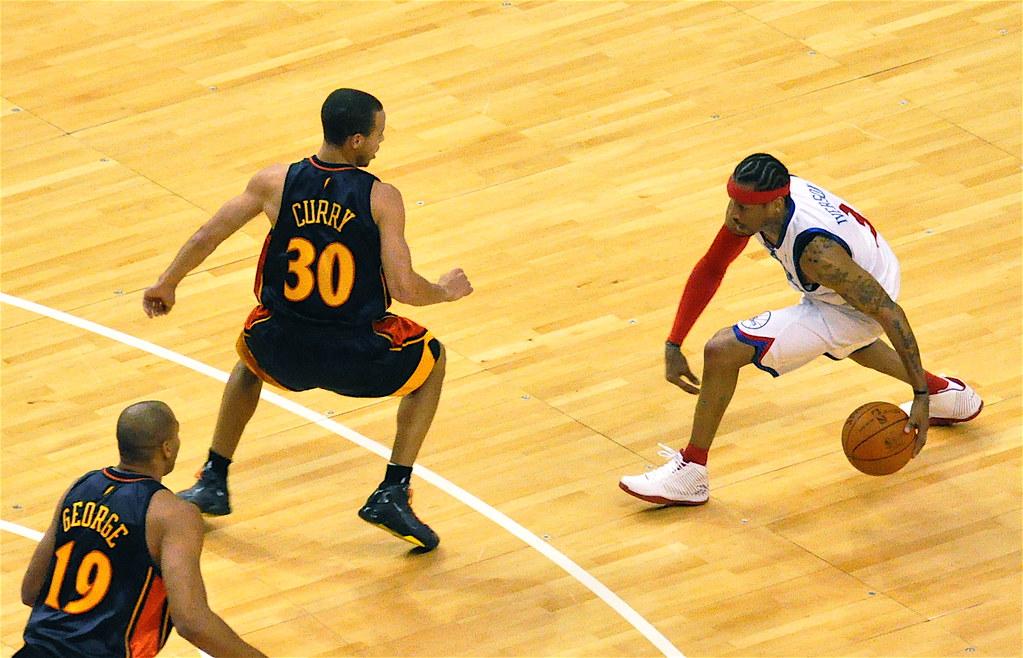 “Allen Iverson and the Sixers” by Kevin Burkett is licensed under CC BY-SA 2.0

Basketball is one of the most exciting sports in the world, the NBA has the most competitive players in the world that makes fans excited to watch their favorite team’s or player’s performance.

My favorite moment in the basketball game has to be when you see guys perform the sickest killer crossover moves on the best defender on the court.  And you watch the defender stumble to the floor.

Crossover in basketball becomes an ART itself in basketball. The fundamentals and the perfection of every step in the moves need to fall in line in order for your defender to take the bait.  Once the defender takes the bait, you go for the killer crossover to make them tumble to the floor.

You might have your favorite NBA crossover in mind, today, we’ll list the 10 best crossover moves of all time in this article.

10 Best Crossover Moves of All Time

Dwayne Wade was a fun player to watch.  His great ability to score and blow by players on the court makes him one of the best ballhandlers in the league.

He has many killer crossover highlights in his career,  and one of his crossover in a basketball game was when Wade crossover Cleveland Cavaliers Eric Snow, making him fall to the floor.  Snow was embarrassed on multiple occasions before and after his retirement.

Jason Williams impressed Gary Payton during a turnover steal which leads to a fastbreak opportunity.  Williams stole the basketball and dribble down the court while Payton chases him down.  Williams by blowing by Payton with a crossover moves at three points line and scored a basket.

Andre Iguodala displayed his ballhandling skills against Nuggets’s Quincy Miller.  Iguodala did a double crossover on Miller during the transition, and cause him to tumble to the floor.

This moment is what makes the NBA so fun to watch.

Tim Hardaway is definitely on this list because he is known as Mr. Crossover.  During his career, he embarrassed so many players on the court by causing them to fall on the ground with his crazy handles and hesitation.

There are too many crossover highlights to pick the best one for Hardaway because there are just too many great crossover moves.

Chris Paul is one of the crafty ballhandlers in the NBA. His aggressiveness to attack the basket and his sick crossover moves cause many of his opponents to tail behind him.  CP3 and Stephen Curry have been going head to head with each other on multiple occasions.  There is a tug of war to argue who is has the best crossover moves between the two players.

Paul revenge on Curry after Curry was embarrassed with sick crossover moves.  Paul embarrassed Curry back on multiple times during a game and he did a shimmy shake back at Curry.

Stephen Curry may be well known for his three points shot, but he is equally good in his ballhandling and crossover moves.

As mention previously, Curry and Paul are long time nemesis.  Paul wants to revenge on Curry because Curry surprise Chris Paul at the baseline with double behind the back crossover moves to cause Paul to tumble to the floor.

Kyrie Irving is by far one of the best ball handlers in the NBA.  Irving may also be known as Uncle Drew where he disguises as an elderly to play pickup games.  Irving’s quick drive to the basket and his crafty ball handle earn him many points in the paints.

Irving still in his prime and we expect to see more highlights from him in the games to come.

Michael Jordan is one of the greatest players in NBA history.   Jordan was very entertaining to watch because you will expect to watch his clutch shot, fadeaway jump shot, or awesome dunk.

Jordan’s ballhandling is often time underrated, but his ballhandling and crossover are equally great compare to his other skills.

Jordan crosses Bryon Russel is one of the highlights that will go down in history because it was Jordan’s last game-winning shot as a Bulls player.  Jordan crosses over Russel and made a jumper with a little over 5 seconds left on the clock.   He won his 6th NBA Championships title with a winning shot.

The first place goes to Allen Iverson crosses Jordan during his early career.  Iverson was by far one of the best ballhandlers in the NBA.  His quickness and craftiness with the ball made many of his defenders tumble.
Advertisement

One of the best crossover moves of all time in Iverson’s career was when he crosses Jordan and made a jump shot.  Iverson stole a shot off the greatest player in the NBA at that time and he even made Jordan tumble from his crossover moves.

The 10 best crossover moves of all time listed above are what captured the most exciting moment in basketball.  A crossover in basketball is as excited to watch as a posterizing dunk or monstrous block.

I can’t wait to watch more exciting crossover moves during the NBA 2020 season in July 2020.  If you want full details on NBA 2020 season return, please click on this link: When Will NBA 2020 Season Return? Date, Format, And Key Information